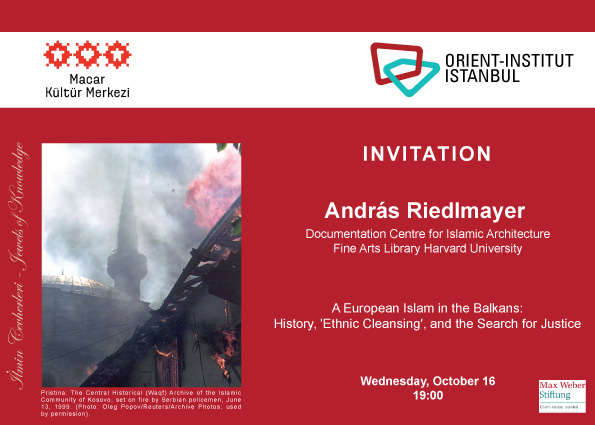 A European Islam in the Balkans: History, 'Ethnic Cleansing', and the Search for Justice / András Riedlmayer

Since ancient times, Southeastern Europe has been a crossroads, where the great empires and religious and cultural currents of the Mediterranean world have met and interacted with each other and with rich indigenous traditions. The long history of cultural interactions has given this region a remarkable legacy, including a still thriving, 600-year-old Islamic tradition, a part of European heritage that deserves to be better known.

The Balkan wars of the 1990s were an attempt to erase this diversity. The conflict resulted in the deaths of 150,000 and the forced exile of millions of people, singled out for persecution, expulsion, and genocide because of their cultural and religious identity. The violence against people was accompanied by systematic attacks on their heritage: the targeted destruction of historic buildings, houses of worship, manuscript libraries, and archives. A Council of Europe report in 1993 termed it „a cultural catastrophe in the heart of Europe.“

Based on Mr. Riedlmayer’s fieldwork for the UN war crimes tribunal, his presentation outlines the history of this region’s diverse cultural heritage, as well as his findings concerning its fate in the 1990s wars in Bosnia and Kosovo, and efforts to bring to justice those criminally responsible for this destruction.

A native of Budapest, Hungary, since 1985 András Riedlmayer has directed the Documentation Centre for Islamic Architecture at Harvard University’s Fine Arts Library. He studied at the University of Chicago and at Princeton University, where he read Ottoman history and Near Eastern Studies. He has published widely in academic and professional journals and has served as president of the Ottoman and Turkish Studies Association and as a member of the board of the Islamic Manuscript Association.

For the past 25 years, Mr. Riedlmayer has been documenting the destruction of libraries and other cultural heritage in the Balkan wars and in organizing postwar assistance to cultural institutions in the region. In 2002, he appeared as an expert witness on cultural destruction in the trial of former Yugoslav President Slobodan Milošević at the UN war crimes tribunal (ICTY) in The Hague. Since then, he has testified in several other cases before the ICTY, including the trials of former Bosnian Serb leader Dr. Radovan Karadžić and his military chief, Gen. Ratko Mladić, and in the genocide case brought by Bosnia-Herzegovina against Serbia before the International Court of Justice. Between 2003 and 2007 he chaired the Middle East Librarians‘ Association’s Committee on Iraqi Libraries.