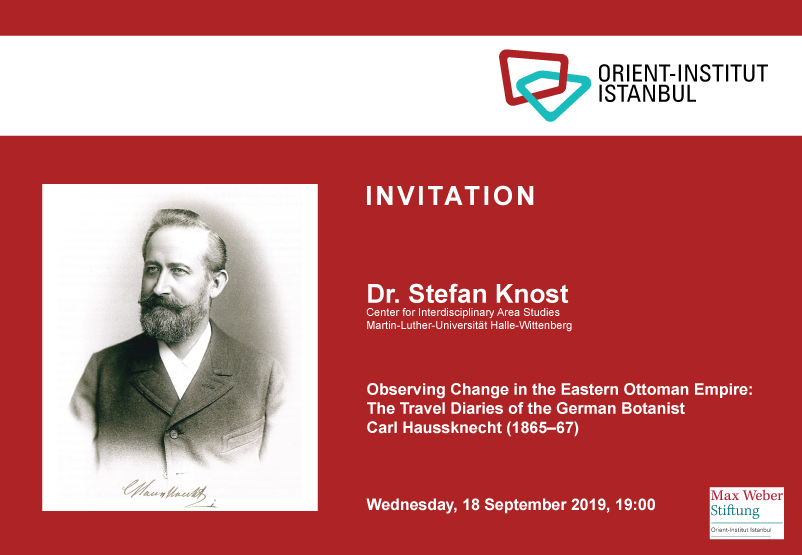 The German botanist Carl Haussknecht (1838–1903) travelled in 1865 and again in 1866–68 in the Eastern parts of the Ottoman Empire and in Iran. His main aim was to collect different types of plants for Edmond Boissier’s six-volume encyclopaedia ‘Flora Orientalis’ (published between 1867 and 1888). However, his travel diaries (almost a thousand pages long) abound with all kinds of information. Apart from his main interest in botany, he recorded his observations on geology, agriculture, archaeology, architecture, foreign merchants and missionaries, local bureaucrats, social and economic conditions. Haussknecht’s diaries, which remained unpublished so far, are particularly rich in information on rural, particular mountainous, areas, as well as villages and small towns. Considering the period of his travels (the 1860s), his descriptions open a window into the Ottoman reform period (Tanzimat) and the reforms’ application in these remote rural areas. This paper focuses on his first journey and his descriptions of the northern and eastern parts of the Aleppo province, a region between the modern cities of Gaziantep, Kahramanmaraș and Șanlıurfa. It will focus on two aspects of the transition from the ancien régime to the ‘modern’ Tanzimat state: the assertion of state control against local self-administration, and economic relations between the towns and their rural hinterland, and analyze how the traveler Haussknecht perceived it.

Dr. Stefan Knost is working on the history of Ottoman Aleppo; he works as a researcher at the Center for Interdisciplinary Area Studies at Martin-Luther-Universität Halle-Wittenberg. He also acted as a visiting professor at the same university’s Oriental Institute, as an associate researcher at the Orient-Institut Beirut, and was a research fellow at the Toyo Bunko (Oriental Library), Tokyo. His publications include Die Organisation des religiösen Raums in Aleppo. Die Rolle der islamischen religiösen Stiftungen (auqāf) in der Gesellschaft einer Provinzhauptstadt des Osmanischen Reiches an der Wende zum 19. Jahrhundert (Beirut: Orient-Institut Beirut, 2009).